Well, snake season is upon us and it’s not with a dance and a jig that I welcome them, that’s for ferkin’ sure. So, here’s the skinny on the snake situation at the Stomp, as we know it…
We call this old tree The Magic Tree. It’s located a couple of hundred metres from the house and the billabong is between the two. This tree at some point came down but some of its root ball remained embedded, just enough to keep it alive and growing. The branches have, over years, grown vertical and each looks like it’s own small euchie. I love this tree.

Underneath the rootball is a large red bellied black snake nest. Now, I’m not anywhere near phobic (or maybe I am..Eeks) but I steer so clear of this in summer. I won’t even go near it on the quaddie!

I know there’s exceptions, and it depends on who you ask, but I’ll go with the locals on this one, even if it’s only for my own peace of mind, but red bellies are known to be top of the snake food chain and will happily eat a brown (the most common and feared snake when you live in rural isolation), if smaller. They are also more docile than the brown and have smaller fangs. Browns will chase you down if they get pissed off enough and a bite from a brown means off to hospital you go…bloody quick! We are very lucky to have a Citizen First Responder unit attached to our rural SES and he only lives a few k’s away. When we call or UHF (emergency channel of local SES) the CFR is dispatched at the same time as the ambo but will get to us long before an ambulance will. They carry anti-venom. Phew!

While I don’t believe in the solar snake stampers or the recipes for snake repellent (seriously, don’t bother, they slither right over it), I do find myself walking with a stomping motion when out in the bush in warmer months. Again, it’s probably placebo, and that’s okay! I do worry about little Gypsy, however apparently Jack Russells are usually the ones who come out best between the two. It’s that ‘usually’ that bothers me. If she gets bitten the best we can do is inject her with a strong vitamin c solution and hope it slows her lymphatic system down long enough to get to town. It’s unlikely.

For us humans, we have a snake and funnel web kit on a hook in the kitchen with step by step on how to apply. We also have 2ways that I encourage, in winter and insist, in summer, be carried when going out into the bush. This really needs to become a habit though (I’m talking to you, Stompers!)
Basically if you are a snake (who has taken up residence and is not just passing through) or a funnel web, and you are in our fenced house area then you will meet your demise. If you are in the bush on the rest of the property, live freely and without our interference, whether we see you or not. It’s a pretty good deal, we have an acre, you guys have the other 29!

It might be time to mention that we have never seen a snake at the Stomp. The previous owners had the block for 30 years. They have never seen a brown and have seen Red Bellies out in the bush, but never in the house area. I did find a huge red belly skin shedding, last year, while checking a wombat burrow. That’s enough for me!!!
And yeah….about those Funnel Web Spiders.. 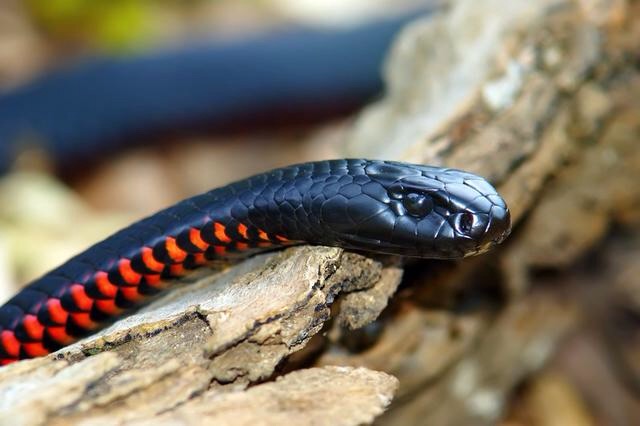 4 thoughts on “Snake Love Not War”